A few years ago, an orthodontist referred a healthy young boy to my office for evaluation. Concerned that the teen’s maxillary left second molar was not erupting, the orthodontist sent the patient to me with three serial panorexes—each taken two years apart—to review. When I first saw the panorexes, I didn’t notice anything out of the ordinary. We even took our own panoramic image and, were unable to see anything.

Because I have a cone beam computed tomography (CBCT) unit available in my office, we decided to take a 3D scan to see if it showed anything the pan image had missed—and sure enough, it did. The 3D image revealed tooth # 16, the maxillary left third molar, actually behind and fused to the second molar. This is the reason why tooth #15 had not come in. 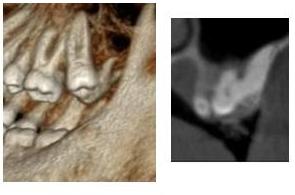 At the time, the patient’s family decided not to extract the tooth because they didn’t want him to lose two teeth. Eventually, we did remove the other third molars.

Looking back at this case, I would say that 3D technology allowed us to make a diagnosis that we would have been unable to make in the past. Through the CBCT scan, we were able to see why the patient’s tooth had not erupted and solve a seven-year mystery in the process (the amount of time the patient’s case had been in review when he visited my practice).  Once I shared my findings with the patient’s orthodontist and dentist, they were excited to finally learn what was causing the problem.

Overall, 3D imaging has changed the way I practice. It not only has proven to be a superior diagnostic tool, but it has also helped enhance communication within my referral network.