The Importance of Knowing Normal Anatomy in CBCT Scans

The acquisition of CBCT scans is probably one of the most mundane tasks, but it is an important part of the imaging process. Post-acquisition involves viewing and interpreting the scans. Although the maxillofacial region is complex, by virtue of familiarity, most dentists can interpret this area very efficiently despite the complex nature of anatomy and variances in this region. Understanding what is considered normal is the first step to identifying abnormalities that could pose a challenge in treatment planning.

Normal anatomy can be broadly divided into the maxillary and mandibular regions.

When visualized, the upper regional anatomy is comprised of (but not limited to) the bilateral maxilla, as well as the nerves and vascular supply of the region and the maxillary sinus and other paranasal sinuses (in part or full, depending on the field of view). Along with these areas, the Osteomeatal complex and orbits are the most significant. 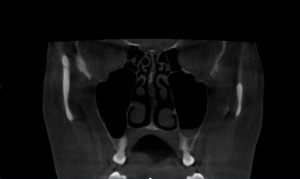 The maxillary sinus is a significant structure that occupies the majority of the area. A normal maxillary sinus often shows mild mucoperiosteal lining and empty black spaces representing the air. The floor of the sinus is an important area as it is the closest to dentition and can be the benchmark for identifying odontogenic vs. non-odontogenic lesions that extend into the sinus. It also happens to be one of the few structures where soft tissue lesions can be differentiated from hard tissue lesions.

In contrast, the mandible is the area where only hard tissue can be viewed in CBCT scans. The mandible is comprised of (but once again, not limited to) the IAN canal, as the major vital structure, as well as other critical structures that must be evaluated, such as the condyles, coronoid process, sigmoid notch, mental foramen and lingual foramen. If the IAN canal is not visualized in the mandible, it is most likely due to a deficiency of the anatomy rather than the quality of the scan. Accessory foramens may be noted in the mandible predominantly around the canine/premolar area, while mandibular components of the TMJ apparatus may or may not be captured depending on the FOV of the scan. If visualized, it is imperative to evaluate the condyles for any osteoarthritic changes. 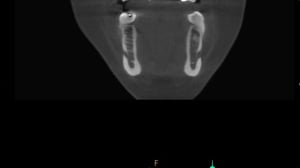 When captured in the scan, the comparative visualization of the contralateral sides of the jaws when gives the clinician a fair idea of normal variations of the anatomy vs pathological lesions.